Hong Kong tycoons go on trial in Corruption case. How about the Corrupt Indonesian Tycoon?

HONG KONG-Two billionaire property developers have gone on trial in Hong Kong in the city's biggest ever corruption case.

Thomas and Raymond Kwok are accused of giving bribes in exchange for information on land sales between 2005 and 2007.

All five, arrested in March 2012, have pleaded not guilty to the charges.

BBC Hong Kong correspondent Juliana Liu says it is the most high-profile corruption case the city has ever seen and comes at a time of heightened attention into the perceived cosy ties between the government and property tycoons.

Thomas and Raymond Kwok smiled as they arrived at Hong Kong's High Court, walking past dozens of photographers who flanked the main entrance.

As proceedings began, the judge said that the jury would not be sworn in until early next week.

The five are charged with various offences related to payments and unsecured loans amounting to HK$34m ($4.38m; £2.84m). 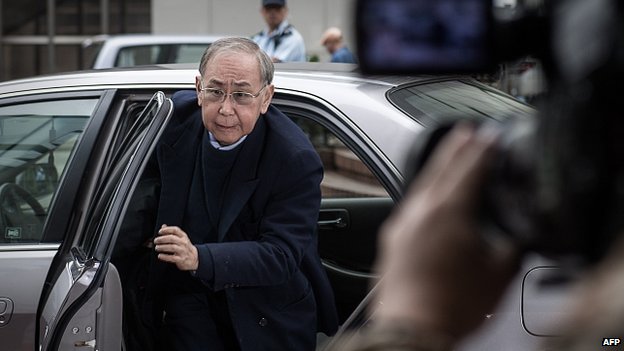 The Department of Justice indictment said Mr Hui, 66, faced eight charges, some of which related to misconduct in being "favourably disposed to Sun Hung Kai Properties... and Thomas Kwok and Raymond Kwok" while in office, in return for payments.

Other charges against Mr Hui relate to rent-free use of luxury apartments and acceptance of unsecured loans, the document says.

He is the highest-ranking former official ever to face trial in Hong Kong.

Prominent government and business figures are among more than 80 prosecution witnesses listed for the trial.
KPK AND INDONESIAN TYCOON
The Corruption Eradication Commission (KPK) said on Tuesday that it would expand its probe into other Bank Indonesia liquidity support (BLBI) debtors who were alleged to have colluded with government officials to offer them clearance letters freeing them from their obligation to pay their debt under the presidential administration of Megawati Soekarnoputri in 2002.

KPK deputy chairman Bambang Widojanto said that investigators were now looking into alleged irregularities in the issuance of a clearance letter for tycoon Sjamsul Nursalim, the owner of Bank Dagang Nasional Indonesia, which received financial assistance under the BLBI scheme.

But Bambang also said that investigators launched a probe into 21 other tycoons receiving such a clearance.

“We are not prosecuting the policy, we are investigating how the policy was abused [by state officials] as a means to commit crime. The letters should only be given to those who had paid their debt. But why in some cases did the debtors who had not paid their debt receive such a luxury?,” Bambang said on Tuesday.

Sjamsul, who is also known as the owner of tire maker giant Gajah Tunggal and coal miner Bukit Baiduri Energi, is currently overseas. Bambang said that Sjamsul’s whereabouts would not hamper the ongoing investigation at the KPK.

“Remember graft convict Anggodo Widjojo, who was arrested abroad after 2 years? So, don’t worry we have our own way to conduct the investigation,” Bambang said.

During the 1997-1998 Asian financial crisis, the government, through the central bank, provided liquidity support of Rp 144.5 trillion to assist 48 commercial banks in coping with massive runs during the monetary crisis, but 95 percent of the money was eventually embezzled. Sjamsul received Rp 28 trillion of BLBI funds.

KPK Bambang refused to disclose details about the possible investigation on the other tycoons that the antigraft body would launch in the future, adding that giving away too much information could compromise the ongoing investigation.

Earlier on Monday, the KPK grilled former coordinating economic minister Rizal Ramli under the administration of president Abdurrahman “Gus Dur” Wahid in relation to the case. Speaking after the questioning, Rizal blamed Megawati for the massive financial losses from the BLBI scandal.

Rizal said that the debtors lobbied the Soeharto administration, convincing high-ranking officials to allow them to pay back their debts to the state using assets, whose value was constant, rather than cash.

Rizal said Gus Dur, deplored the Soeharto administration’s decision, which he said would cause the state massive financial losses, as the value of the assets would decrease overtime.

“To make sure that the tycoons paid back the same amount as they had borrowed from the state, we issued what we call a personal guarantee notes policy. The policy meant that if the tycoons couldn’t pay their debt, then their families, until the third generation, bore the responsibility to pay,” he said.

“The policy gave the government strong bargaining positions in the case, but after our administration was over the policy was withdrawn [under Megawati’s administration],” Rizal explained.