KONFRONTASI -   China’s grand celebration to mark the 70th anniversary of communist rule was marred by violent protests in Hong Kong
on Tuesday, with a police officer opening fire at a protester for the first time, injuring him in the chest.

Video footage showed the officer firing at the 18-year-old student who, along with other protesters, was trying to attack him and another officer during a scuffle. The student from Tsuen Wan Public Ho Chuen Yiu Memorial College was transferred from Princess Margaret Hospital to Queen Elizabeth Hospital, where he underwent surgery. He remained in critical condition on Tuesday night.
The incident could lead to further hostility between.

The incident could lead to further hostility between anti-government protesters and the police force, as Hong Kong’s worst political crisis in decades – triggered by a now-withdrawn extradition bill Hong Kong, one of the most crowded metropolises in the world, had been in virtual lockdown since the morning, with many shops and subway stations closed.

The turmoil in the former British colony was in sharp contrast to the rest of China, where hundreds of millions of people watched on television or online what was billed as the
grandest military parade
in the history of the People’s Republic.

All retired and present party leaders – with the noticeable absence of former premier Zhu Rongji and former vice-president Li Yuanchao – joined President Xi Jinping on the rostrum of the Gate of Heavenly Peace, where the republic’s founding father Mao Zedong declared communist rule on October 1, 1949.

Flanked by his predecessors Jiang Zemin and Hu Jintao, Xi used his eight-minute televised speech to praise the accomplishments of Chinese people over the past seven decades and pledged to achieve his vision of a “Chinese dream” of national rejuvenation and global prominence.

Hong Kong also featured prominently in the celebrations. Xi said China must uphold the principle of “one country, two systems” that promises a high degree of autonomy to Hong Kong while preserving its freedoms and unique lifestyle following its return to Chinese rule.

“We need to maintain the long-term stability and prosperity of Hong Kong and Macau,” the president said in his speech.

Hardline protesters vow to step up campaign after teenager shot 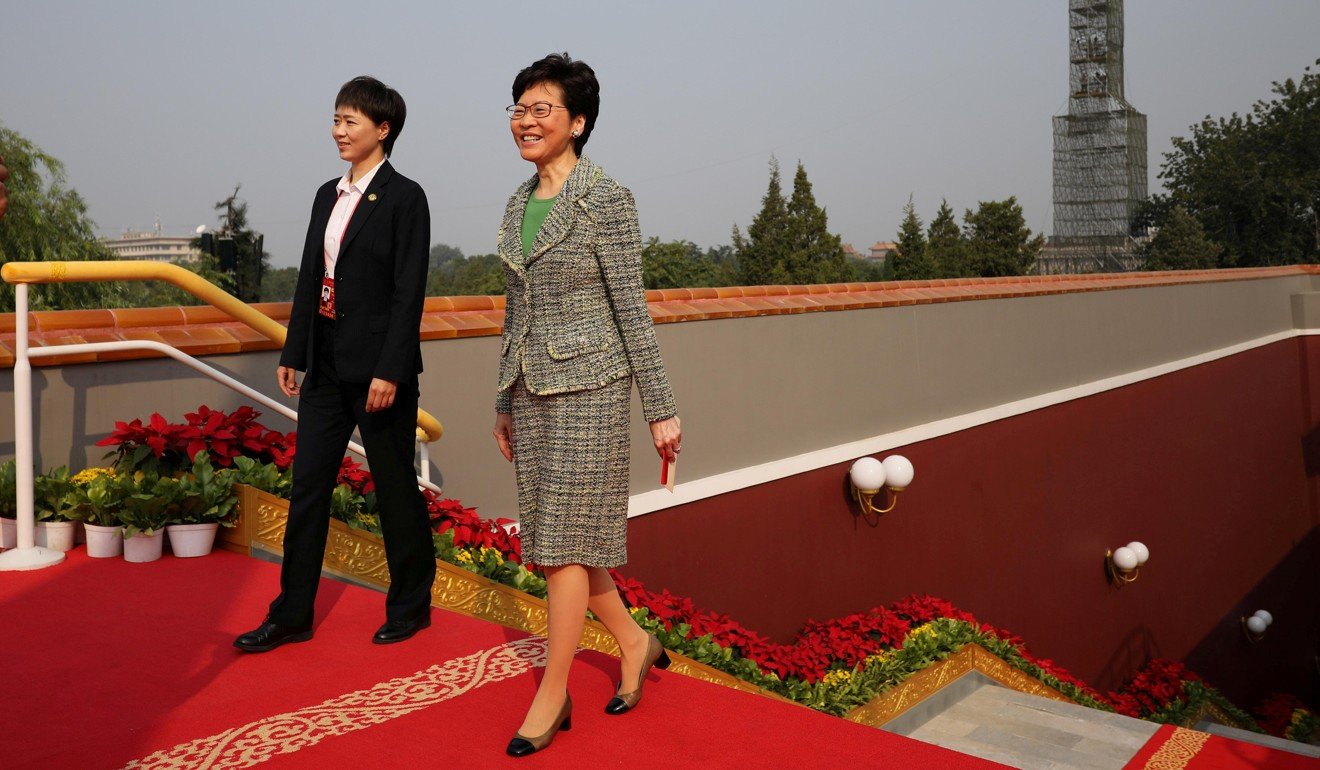 But in Hong Kong, the mood could not have been more different. Defying a police ban, tens of thousands of protesters took to the streets in the early afternoon. Spontaneous protests broke out in different parts of the city, where violent demonstrators attacked officers with bricks, petrol bombs, acid bombs and sticks. Police responded with full force, using water cannons, tear gas, rubber bullets and beanbag rounds. 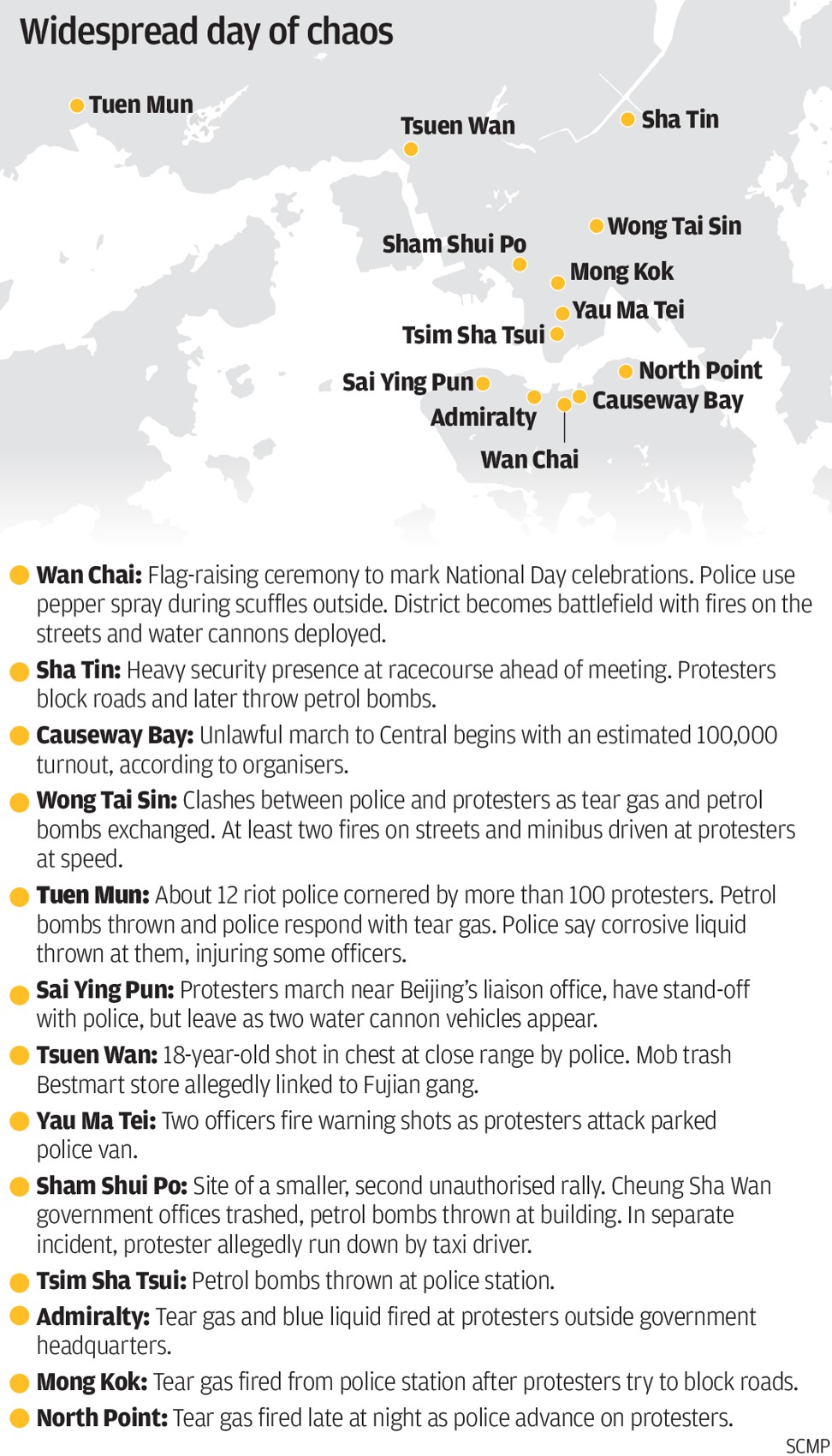 The fighting was more vicious and intense than in previous days, with the worst scene taking place near Tai Ho Road in Tsuen Wan in the afternoon.

It was not immediately clear how the fighting began, but video footage taken by the City University Students’ Union Editorial Board showed a number of protesters beating and stabbing a police officer, who was on the ground. Another officer tried to help him but was stopped by two rod-wielding protesters. The officer pulled out his service revolver and pointed it at them, issuing a verbal warning. One struck his right arm with a rod and the officer opened fire at about 4.15pm.

The masked protester, who was later confirmed to be a secondary student, fell to the ground and other protesters ran from the scene. One tried to help his injured friend, who remained conscious immediately after he was shot, but was subdued by a police officer. 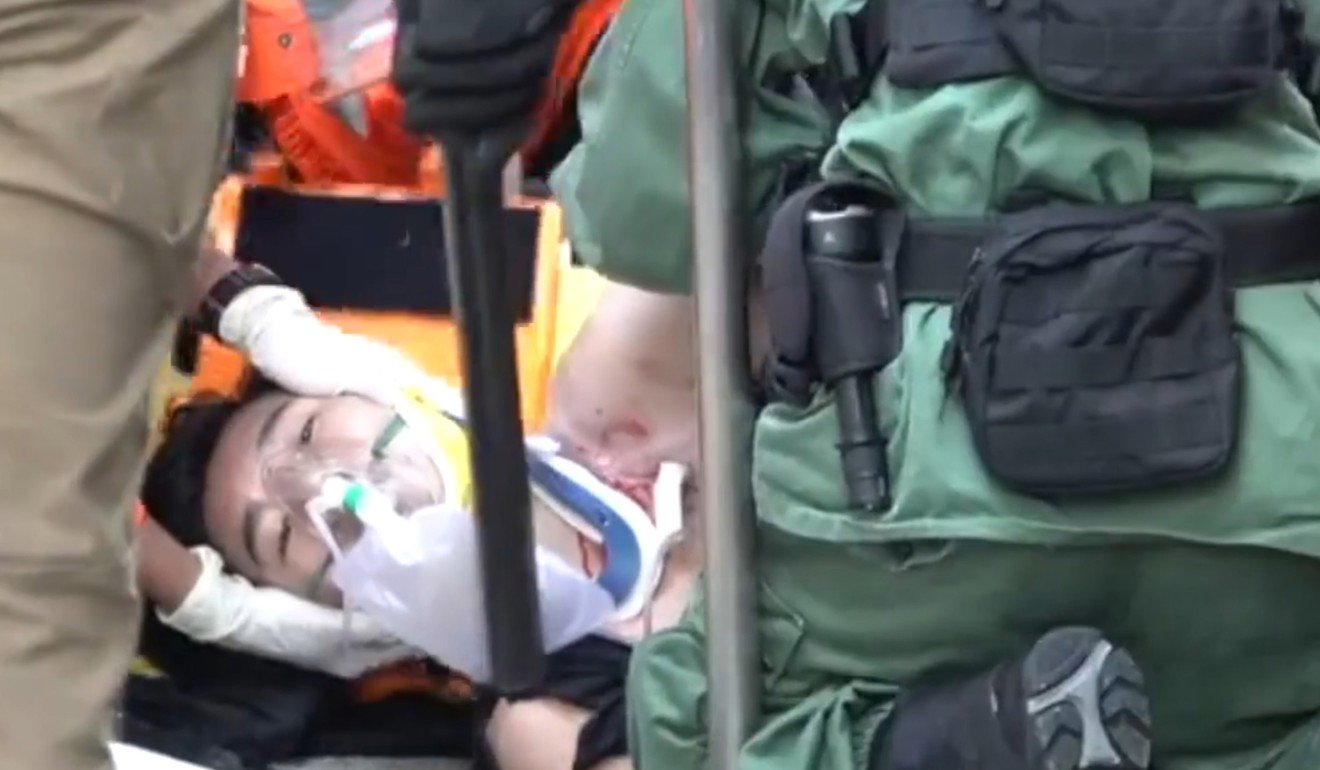 The 18-year-old protester underwent surgery and is in critical condition. Photo: Handout
Share:

Video clips of the shooting quickly circulated on social media, and rumours soon started to spread about shootings in other places but none of them could be verified.

Hong Kong Human Rights Monitor director Law Yuk-kai, after seeing the video clip, concluded that what the officer did was “not appropriate” and said he had made a “wrong judgment”.

Law said the shooting could have been prevented. “The officer should have de-escalated the tension instead of raising the danger level,” he said.

A police spokeswoman confirmed that an 18-year-old protester had been hit by a live round, injuring the area near his left shoulder, and had been taken to Princess Margaret Hospital.

“[Protesters] continued with their attack after officers warned them to stop. As an officer felt his life was under serious threat, he fired a round at the assailant to save his own life and his colleagues’ lives,” the spokeswoman said in a recorded video posted to the force’s Facebook page.

“The police force really did not want to see anyone being injured, so we feel very sad about this. We warn rioters to stop breaking the law immediately, as we will strictly enforce the law,” she added.

Safeguard Hong Kong Alliance, a pro-government group, said the incident was regrettable but defended the police officer. “He did so under a violent attack that put him and his colleague in danger ... The student was misled by others to use violence against the police. Those agitators should be held accountable for this,” an alliance spokesman said. 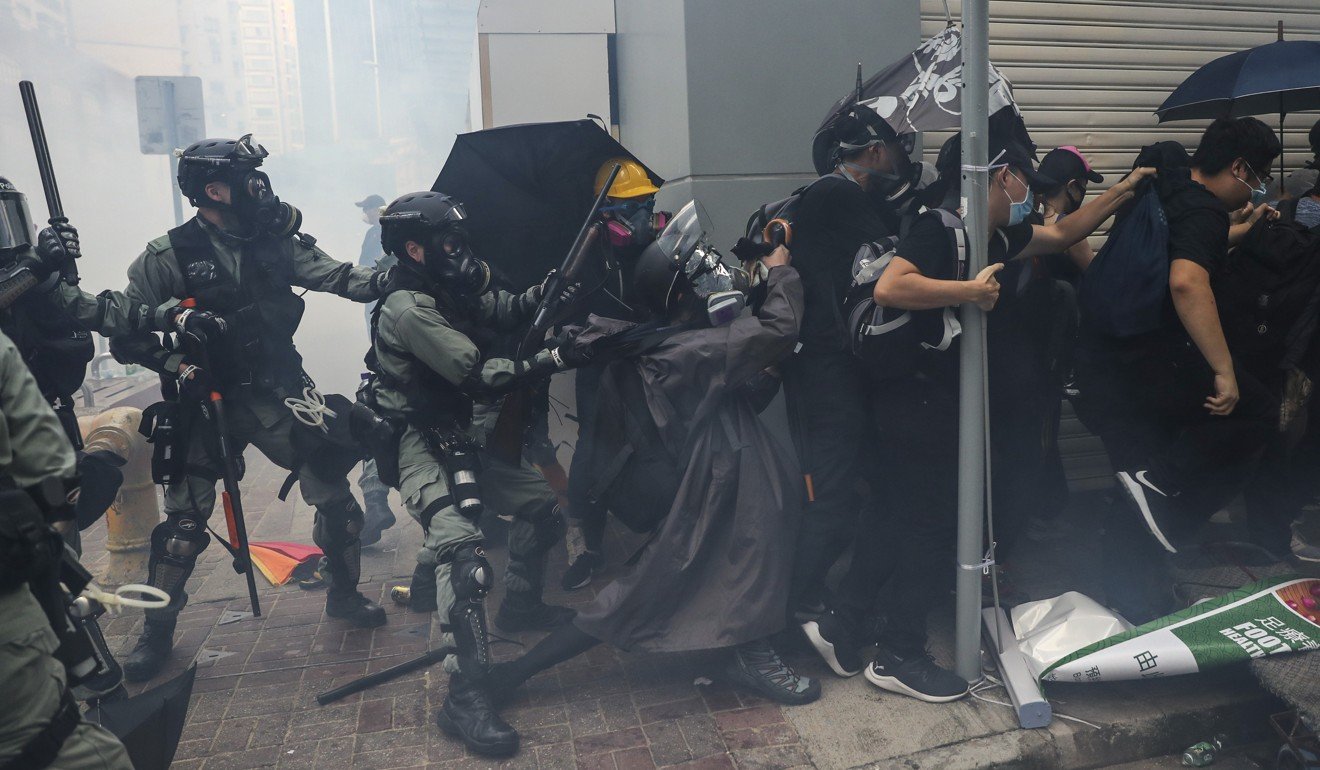 More than 180 people were arrested during the protests on Tuesday. Photo: Sam Tsang
Share:

The fighting continued well into the night, leaving a trail of destruction across Hong Kong, Kowloon and the New Territories. In total, 66 people were injured and more than 180 arrested.

The MTR Corporation continued to be targeted by protesters, who accuse the railway operator of colluding with police. Protesters lit fires at the entrances to several closed stations, including Wan Chai, Sham Shui Po and Causeway Bay.

Government offices, shops owned by Beijing-friendly businesses and at least three offices of pro-establishment lawmakers were also vandalised and defaced.

Although the rampage in Hong Kong’s streets made international headlines, coverage was conspicuously absent from the mainland’s heavily censored media.

While the rest of the country
celebrated its resurgence
after “a century of humiliation”, its financial centre and special administrative region was cloaked in fire and smoke. And as an extravagant fireworks show lit up the night sky of Beijing, exhausted Hong Kong police and protesters faced off against each other on tear gas-filled streets, with no end in sight. (jft/The South Morning China Post)