Millions of Middle Class Southeast Asians Are Falling Into Poverty

KONFRONTASI -  As the coronavirus pandemic derails economies worldwide, many of the newly poor will come from Southeast Asia, dealing a huge setback to a region that had been prospering from a surging middle class.

The job losses are pausing the outsized boom Southeast Asia has experienced in recent years, with economies possibly taking years to fully recover.

In the Philippines, which has the most virus cases in Southeast Asia, a survey released Oct. 6 by the World Bank and local agencies showed almost half of shuttered businesses were unsure when they could reopen. The extended effects of the nation’s lockdown have been devastating to people like Manila resident Jenn Piñon, 35, who spent years working on a fine arts degree she hoped would make her financially secure. 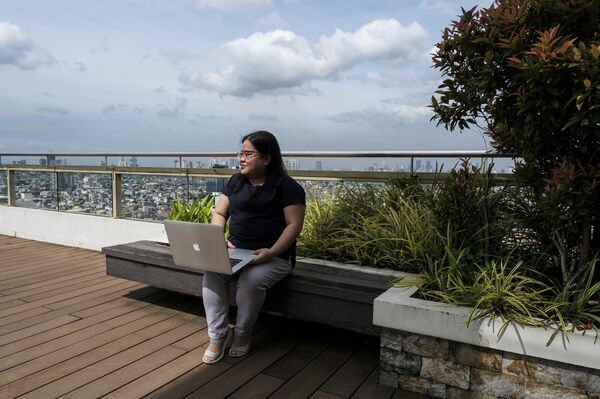 Instead, she has lost contracts she had won as a graphics designer, leading her to turn to selling eggs and hummus online. She’s also been living in her churchmate’s unused condominium unit to keep living expenses low.

“I didn’t expect it at all,” Piñon said of the work she has lost. “I have to thank God that he gave me enough savings for now. Let’s just hope it lasts.”

While incomes have plunged worldwide, the pandemic’s effects are especially severe in emerging parts of Southeast Asia, where a wave of job losses and weak social safety nets mean millions are at risk of losing their rung on the social mobility ladder. The region is likely to come in second behind the Indian subcontinent in charting the number of new poor in Asia this year, said Ramesh Subramaniam, Southeast Asia’s director general at the Asian Development Bank in Manila.

A lack of consumer demand, impending bankruptcies and social-distancing measures continue to impinge on the job market, according to Priyanka Kishore, an economist at Oxford Economics Ltd.

“In all, this points to a long, drawn-out recovery,” she said. “We estimate Southeast Asia’s GDP to be 2% below the pre-Covid baseline even in 2022.”

Note: Estimate is for 20% income or consumption contraction relative to the reference year. South Asia has reference year of 2015, while it is 2018 for the rest.

Bain & Co. last year forecast that Southeast Asia would add at least 50 million consumers to the ranks of its middle class by 2022. The prospect of $300 billion in disposable income attracted the likes of Toyota Motors Corp. and Ikea to expand here. Now, disappearing incomes are stalling growth, as consumption represents about 60% of the gross domestic product of the region’s major economies other than Singapore, says the Washington-based Center for Strategic and International Studies.

As many as 347.4 million people in Asia-Pacific could fall below the $5.5 a day poverty line because of the pandemic, according to the United Nations University World Institute for Development Economics Research. That’s about two-thirds of its worst-case global estimate, and underscores the World Bank’s forecast of the first net increase in worldwide poverty in more than two decades.

The toll has been tough on people like Adi Muhammad Fachrezi in Indonesia. Fachrezi became the first in his family to go to college in 2014. Showing tourists around Java’s towering volcanoes and white sand beaches earned him about 20 million rupiah ($1,357) a month and covered tuition and board.

But that income has dried up as the virus has kept tourists away and he’s had to put his studies on hold. “I’m kind of ruined financially now,” said Fachrezi, 24. 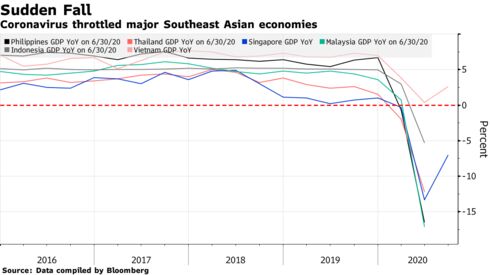 The magnitude of the economic free fall in Southeast Asia’s five biggest economies was severe in the second quarter. Indonesia shrank 5.3% year-on-year, Malaysia 17.1%, Philippines 16.5%, Singapore 13.3% and Thailand 12.2%, data compiled by Bloomberg show. Vietnam, which was among the few trade-war winners, will see its three-decade economic ascent grind to a near halt this year. Contractions could persist through early next year, HSBC Holdings Plc says, amid withering manufacturing and a tourism drought.

Having weathered political upheavals, financial crises and natural disasters, Southeast Asia is no stranger to setbacks. Yet, unlike previous events that pushed millions in the region into joblessness and poverty, such as the Asian financial crisis and 2004 Indian Ocean tsunami, there aren’t other labor or export markets to run to this time.

That’s signaling a prolonged financial squeeze for Southeast Asians. ADB’s Subramaniam estimates improvements in income and poverty numbers lag an economic rebound by two to three years. The International Labour Organization estimates that time at work equal to at least 48 million full-time jobs disappeared in the region in the second quarter.

For months, Farah, 28, who asked to be identified only by her first name, has been futilely looking for a job in the Malaysian capital, Kuala Lumpur. Furloughed from a teaching post at a tutorial center in March, she has been relying on her husband’s modest pay from his job in a retirement home and a little government aid.

“We only eat what is necessary to keep us full,” she said. Her situation lies in stark contrast to a middle-class upbringing. Farah’s life now resembles that of her father’s tough childhood, which the patriarch overcame and landed a cushy government post that afforded her a private college education.

Farah and her husband almost became homeless after their lease expired during lockdown. They had to borrow money from relatives for their apartment’s deposit fee.

Southeast Asia’s top five economies have each spent billions of dollars in income support to cushion the pandemic’s blow. Despite the efforts, social protections such as unemployment benefits across the region, excluding Singapore, remain “often not as good as they should be,” said Christian Viegelahn, an economist at the International Labour Organization. 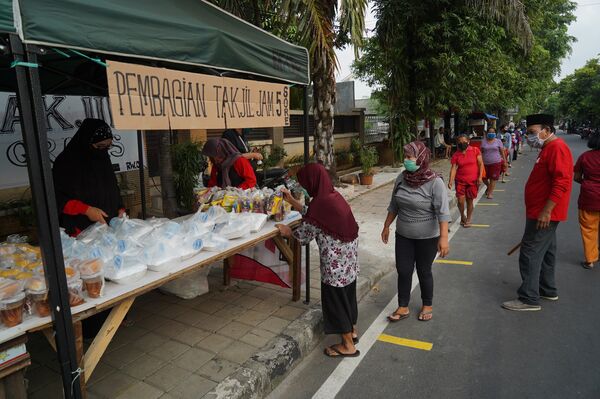 People distribute food packages to the poor affected by the pandemic in Jakarta, May 2020.

The region’s governments on average spend only 2.7% of GDP for such programs, far below the 10.8% global ratio, he said. Informal workers, which represent 76% of Southeast Asia’s total employment, often fall through the cracks, he said.

Back in Java, Fachrezi is trying to look forward. He wants to rebuild his tour-guide business, finish his communications course and still be the first in his family to earn a college degree.

“My best hope is that my business can operate again at the end of the year to coincide with the holiday season,” Fachrezi said. That hope is a tenuous one -- virus cases in Indonesia have continued climbing in one of the region’s biggest outbreaks.(Jft/BLOOMBERG)