Indra Ketaren was born in Medan and brought up in Bremen, Germany; Kuala Lumpur, Malaysia and in Jakarta. Growing up in Europe, his family often traveled around the European Union and Eastern Europe. After studying international relations at the Socio-Political Faculty of Pajajaran University in Bandung from 1976 to 1982, Indra worked in the Indonesian Foreign Service and in the commodities and trade financing import/export sector. In 2016, he founded the Indonesian Gastronomy Association (IGA) in Jakarta with the mission of promoting and preserving the art of Indonesia’s traditional cooking and to establish a national database and referral service. 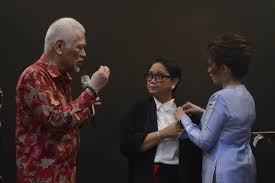 What inspired you to establish the IGA?

I was motivated by the fact that Indonesian gastronomy is not widely known and cultural and historical information about the country’s cuisines is still very limited. Though the public often equates culinary with gastronomy, the definitions of the two words are actually quite different. Culinary, deriving from the latin cullina or “kitchen,” is all about cooking, while gastronomy refers to the practice of choosing, cooking and eating good food. Gastronomy has become part of Indonesian daily life. Indonesians themselves often do not realize the colorful background and long history behind the dishes that are served in front of them.

Do you work with any other  organizations?

I am founder of Akademi Gastronomi Indonesia (AGI) but currently I’m more focused on IGA. AGI and IGA are organizations of culinary connoisseurs. Some members of IGA are board members of the Indonesian Chef Association (ICA). ICA is an organization of food processing professionals.

Were there challenges you faced when setting up the association?

Why is food so important to Indonesia’s sense of nationhood?

IGA’s motto “.. every food has a story ..” (omnis cibus habet fabula) means that there is a deep history in a national cuisine, which even dictates behavior and adat laws. Food is used as a powerful symbol in the rituals, folklore and customs of hundreds of ethnic groups here. A country’s food is inextricably bound up with a people’s sense of self and in their character. It’s my belief that our wonderful food contributes mightily to our identity as a nation. This intangible nature of food is rarely talked about in Western gastronomic circles.

How many members are in IGA?

Officially 138 members, excluding some high officials in government and other notable people who do not want their names mentioned. If you include everybody, our membership totals 195 members. The organization also accepts foreign members residing in Indonesia who have a strong interest in Indonesian food culture.

Does IGA hold meetings and get-togethers?

Yes, IGA holds meetings to discuss management issues and other topics. Our members assess the cooking methods, culture, history and environmental influences behind specific traditional dishes, as well as how recipes have been modified over time. We have regular food tastings. We take particular pleasure in discovering the heritage of traditional ethno-cuisines of our ancestors.

Does IGA participate in events and conferences?

We try to promote the understanding, appreciation and enjoyment of Indonesian cuisine to the rest of the world by attending international gastronomic promotions, exhibitions, food festivals and culinary events and participating in joint promotions with Indonesian embassies abroad. In February 2015, I represented AGI at Madrid Fusion in Spain and enrolled AGI as a member in the International Academy of Gastronomy in Paris in the same year.  I also helped prepare an Indonesian culinary event at the Indonesian Embassy in Madrid.

What are your personal favorite dishes?

Indonesia is so rich in regional foods spread throughout the 1,340 tribes and sub-tribes and thousands of islands from Sabang to Merauke that it is difficult to choose just one or two favorites. I am especially partial to Javanese and Minangkabau cooking. At home, the easiest and quickest dish to prepare is of course nasi goreng. The most difficult are Minangkabau recipes.

What book has had a big influence on you?

Because of my special interest in Indonesian gastronomy, I learn more from Indonesian language books written by Indonesian authors. In my opinion the best book is Upaboga Di Indonesia: Ensiklopedia Pangan & Kumpulan Resep (Gaya Favorit Press 2003) by the late Suryatini N. Ganie, a  leadinglight in Indonesia gastronomy and founder of the Gastronomic Institution of Indonesia (Lembaga Gastronomi Indonesia).

How does Indonesian cuisine differ from other cuisines?

Apart from local cuisines developed by native Indonesians, there have been significant contributions to the national cuisine made by Malay, Chinese, Indian, Arab and European colonists and settlers in the archipelago, even long before the Republic of Indonesia ever came into being. These ethnic influences, handed down from generation to generation, have given Indonesian cuisine its own distinctive character.. The cultural mix has given rise to the great variety found in Indonesian cooking. For example, some dishes tend to spicy, fatty and very spicy, while others have none of these characteristics. Our organization encourages cooperation between Indonesia’s regional governments to preserve the rich heritage of traditional foods inspired by our ancestors, with a special emphasis on rare and little known dishes.

Do you feel that foreigners appreciate Indonesian food?

Based on the experiences Indonesians present at such international events as ITB Berlin, Madrid Fusion, Milan Expo, Gastronomie Jaarbeurs, etc., there is always an enthusiastic reception for Indonesian food by attendees. Moreover, Indonesian diaspora communities in the USA and Australia regularly organize food festivals, which are warmly received by locals. Many Indonesian embassies in the EU hold culinary events, which are also eagerly attended by local communities.

Where do you find the most authentic Indonesian food?

For Indonesia’s best-tasting food, venture out to local eateries (warung or rumah makan), night markets (pasar malam) and street stalls. There you’ll find food that tastes much better than what you’ll find in tourist restaurants and at a fraction of the cost.

What is your favorite restaurant in Bali?

I really like the superb food and nice atmosphere of Bloem’s Waroeng Restaurant in Kedonganan.

Where can one learn more about IGA?

Email me at indraket@gmail.com. My Indonesian gastronomy blog is gastroina.blogspot.co.id. Our members communicate through a Google Group and a WhatsApp Group.