KONFRONTASI -  China has deployed large numbers of paramilitary personnel close to the border with Hong Kong, in what observers say is intended to send a message to protesters in the Asian financial hub.

On Wednesday, CNN teams on the ground in the mainland Chinese city of Shenzhen saw uniformed members of the People's Armed Police Force (PAP) with riot shields and batons, as well as numerous semi-militarized vehicles, stationed at the city's Bay Sports Center.
The PAP is the 1.5 million-member paramilitary force the government regularly deploys to quell protests within its borders. It is under the command of China's central military commission, headed by Chinese President Xi Jinping. 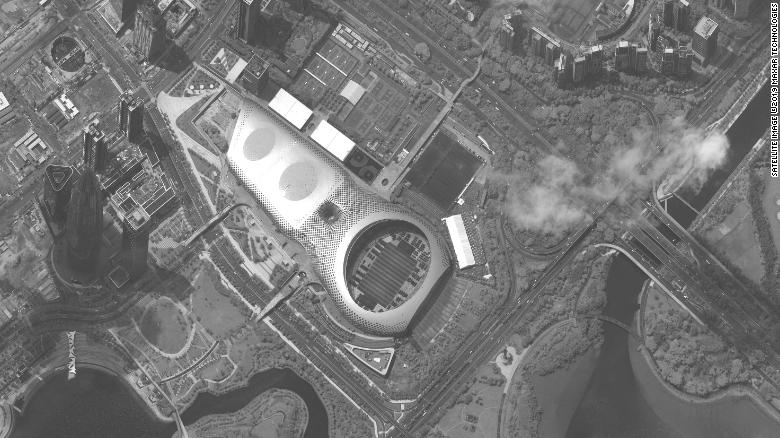 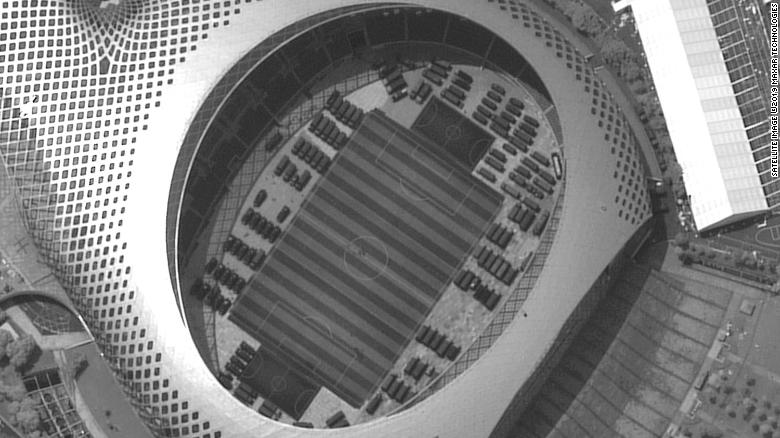 Satellite imagery shows Chinese military vehicles congregating near Hong Kong's border.
The presence of paramilitary units just miles from the border with Hong Kong comes amid speculation that Chinese forces could enter the city and quash the protests, which are in their third month.
But there has been no indication that the PAP are set to do that, and such an intervention could have devastating effects on the territory's economy.
Satellite images of the sports center, located just across the harbor from Hong Kong, purport to show vehicles gathering at the center. On the ground Wednesday, CNN saw dozens of troop carriers and at least one armored personnel carrier.
A PAP officer told CNN the forces had just arrived for a temporary assignment, staying at the sports stadium where they were filmed by CNN. The officer did not explain why the troops were stationed there.
Under Hong Kong's Basic Law, its mini constitution, the government is legally allowed to request help from the Chinese Peoples' Liberation Army (PLA) garrison of more than 6,000 soldiers that is already based in the city.
The Hong Kong government can request assistance to maintain public order and for disaster relief but would have to justify its reasons for needing PLA help.
Johannes Chan, Professor of Law and former Dean of the Faculty of Law at the University of Hong Kong said this option would only be invoked in "extraordinary circumstances that are beyond the ability and control of the Hong Kong government."
"I don't think we have reached that stage yet," he said.

A United States official with direct knowledge of the latest assessment on Hong Kong told CNN Wednesday that the US does not see forces "streaming to the border" between mainland China and Hong Kong.
This public profile is part of China "sending a message" to Hong Kong and the world that they are present and have the capability, the official said.
But the official added that the situation could quickly change as the forces are mobile, noting that China does have the capability to put significant forces into Hong Kong "within several hours."
The forces on the Shenzhen side are largely, if not all, PAP, according to the official. In recent months, as the crisis has built up, the PAP has "increased readiness levels," as well as making public shows of forces with anti-riot training.
On Tuesday, US President Donald Trump tweeted that the US had seen Chinese troop buildups near the border, though it's unclear whether he was referring to the PAP.
Earlier this week, Chinese state media circulated videos purporting to show an increased military presence in the city of Shenzhen.
However, Chinese military assets are usually based on the border and there are several PLA bases and barracks stationed around Hong Kong. 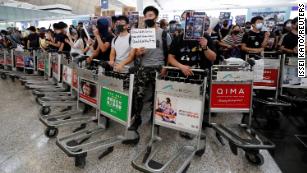 Why Hong Kong is protesting
Experts say such an incursion by Chinese troops into Hong Kong would have disastrous effects for the city: It could hurt Hong Kong's status as an Asian financial hub; lead to a mass exodus of people; trigger a stern international response; and ultimately mean a failure of the "one country, two systems" policy.
Given the city's close ties to mainland China, any intervention of force would risk ricocheting through the entire country at a time when the world's second biggest economy is already vulnerable because of the trade war with the United States.

Hong Kong's protest movement started in early June in opposition to an extradition bill, which critics feared could be used to target dissidents for prosecution in mainland China. The bill has since been shelved, but the uproar stoked a wider civil unrest that shows no sign of ending.
Tuesday saw several flashpoints, as protesters overran airport security, using luggage carts to set up barricades in front of security checkpoints and blocking passengers from accessing their flights.
Chinese government authorities strongly condemned the protesters on Wednesday, describing their actions as having "broken the bottom line of the law, morality and humanity." 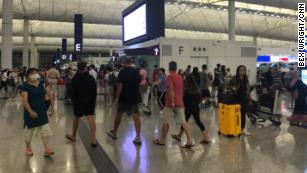 Order returns to Hong Kong airport, but tensions linger
China has adopted a more strident tone in recent weeks, focusing on violence committed by a smaller faction of protestors and framing the movement as one of radical separatists being controlled by foreign "black hands."
But the protesters by and large are young, angry and leaderless. They complain that the government has continued to ignore their five demands, which include calls for universal suffrage and investigations into alleged police brutality and misconduct.
Hong Kong leader Carrie Lam has repeatedly apologized for her government's botched handling of the extradition bill that initially sparked the protest, and has vowed to do a better job of listening. But she said the political issues will only be dealt with after law and order resumes.(jft/CNN)