In Edinburgh and Glasgow, Thousands strike for climate action

KONFRONTASI -  Thousands of young people are expected to take part in school strikes across Scotland and around the world to demand urgent action on climate change.

They are the latest in a series of strikes started a year ago by 16-year-old Swedish schoolgirl Greta Thunberg.

The protests have now spread across 150 countries, with Friday's action billed as the largest so far.

Events are planned in all of Scotland's major cities, many towns and some islands including Iona and Skye.

Up to 10,000 people are expected in Edinburgh - and about half that figure in Glasgow.

The young protesters are calling for an end to the burning of fossil fuels.

Greta Thunberg will be marching in New York after crossing the Atlantic by sailing boat.

She will address a climate summit at the UN General Assembly there next week. 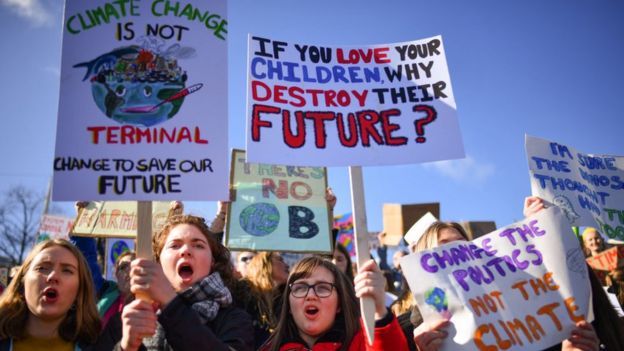 Scotland's largest teaching union, the Educational Institute of Scotland (EIS), has urged local authorities not to punish pupils who take part in the strikes.

General secretary Larry Flanagan said: "Whilst the EIS is not encouraging pupils/students to participate in anti-climate change strikes, we recognise that many will do so.

"We believe that their right to do so should be respected and that participants should not be sanctioned or punished as a consequence.

"If we are to encourage our pupils to be confident individuals that effectively contribute to society on global themes including sustainability, we shouldn't seek to punish them when they campaign for global sustainability."

The Scottish government said it was "pleased to see our young people actively engaging on the issue of climate change".

But a spokesman said student absence was a matter for individual schools to consider.

He added: "The global climate emergency and a Green New Deal for Scotland are at the centre of our Programme for Government.

"We are leading by example through bold actions. We are redoubling our efforts and we will end Scotland's contribution to global climate change by 2045."

Last month, Edinburgh councillors agreed to allow schoolchildren to take part in the protests for one authorised school day per year.

And they said no punishment would be levelled at pupils or parents if they chose to strike over a longer period.

However, the protestors have been banned from Princes Street - which was on their planned route, heading to the Scottish Parliament - as it would mean tram services having to stop.

Council officials said this would cost the local authority about £15,000 in damages, and would have a "large impact" on how people travelled to and from Waverley Station.

They said the disruption was likely to continue for several hours after the march ended.

Stop Climate Chaos Scotland, an umbrella organisation for 40 unions, faith groups and community groups, said its members would be "out in force".

Spokeswoman Kat Jones said: "The young strikers are bringing the voice of the future powerfully into the present day.

"They describe the stark reality of climate breakdown and what it means for the world's future, their adulthood."

Campaigning organisations Friends of the Earth Scotland and Global Justice Now will be closing their offices all day to participate in the protests.

Friends of the Earth Scotland climate campaigner Caroline Rance said: "Millions of schoolchildren across the world have been walking out of lessons every Friday to strike for climate action.

"The children are marching for their future. We're proud to stand with them and urge everyone else who can to do the same."(Jft/BBC)