Asean member states meet with China as South China Sea dispute carries on amidst push to have code of conduct finalised. TVK

Asean and China expressed readiness to resume work on the long-overdue code of conduct on the South China Sea during the Asean-China Summit in Bangkok over the weekend, but solving the issue of conflicting claims as a bloc is looking unattainable.

China and a handful of Asean countries, including Vietnam, the Philippines and Malaysia, have conflicting claims on the South China Sea. The code of conduct is to ensure territorial disputes with China will not lead to war.

Prime Minister Hun Sen yesterday on Facebook outlined what was covered during a sideline meeting with China.

“We encouraged for the development of important negotiations toward an early conclusion of the code of conduct on the South China Sea,” Mr Hun Sen said, noting that Asean in July finished the first COC draft.

“We emphasised the need to maintain an environment conducive to the COC negotiations, and thus welcome practical measures that could reduce tensions and the risk of accidents, misunderstandings and miscalculation,” Mr Hun Sen said. “We emphasised the importance of non-militarisation and self-restraint in the conduct of all activities by claimants and all other states.”

Chinese Premier Li Keqiang in a statement yesterday said Aseanleaders must wrap up the code of conduct on the South China Sea. 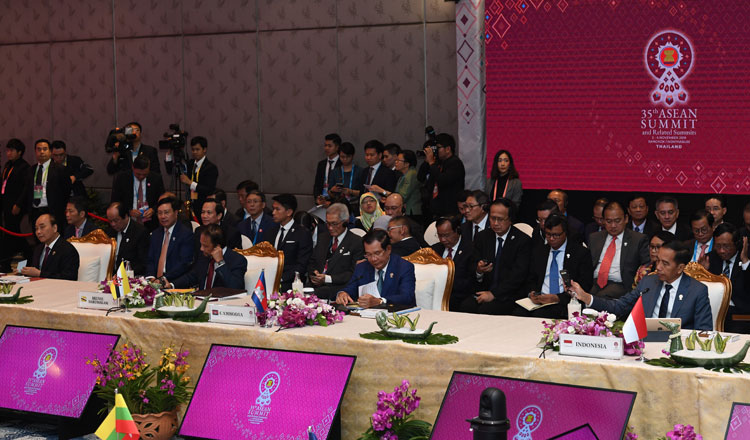 “We stand ready to work with Asean countries within the existing foundation and basis to strive for new progress in the COC, according to a three-year time frame, so as to maintain long-term peace and stability in the South China Sea,” he said.

Paul Chambers, a lecturer of international affairs at Naresuan University’s College of Asean Community Studies in Thailand, said China and some Asean countries have no real interest in signing the code of conduct.

“The code would create rules for all claimants in the South China Sea to follow,” Mr Chambers said.

“However, in order appear to maintain harmonious relations with Southeast Asia, China has broadly supported the code,” he added.

Mr Chambers noted that some Asean member states with conflicting claims with China may need to fend for themselves.

He said since Rodrigo Duterte became president of the Philippines in 2016, Vietnam has been the only country challenging China’s claims.

In 2012, Asean failed to draft a joint statement to condemn China for an increased military presence on the South China Sea because Cambodia refused to be a signatory.

According to Manila Times reports, Mr Duterte yesterday said, the Philippines will maintain the policy of being a “friend to all and enemy to none”.

Martin Andanar, communications secretary of the Philippines, told reporters yesterday that the island nation is now looking for early approval of the COC.

“The president [Duterte] has always maintained to having a policy that is friends to all and enemies to none; our relationship with China is not limited to one aspect. We have other factors to consider,” Mr Andanar said.

Government spokesman Phay Siphan yesterday said Cambodia calls on Asean members in dispute with China to be patient and wait for peaceful negotiations to solve disputes.

“Cambodia is not taking sides with any country – we are neutral, we call for a peaceful dialogue,” he added. “Our stance is for Asean not to solve the issue. Nations that are in dispute need to solve their own issues.”(Jft/KhmerTimes)