‘We finally put a name and a face to this monster.’ DuPage officials ID killer of 16-year-old girl in 1976. Man, now dead, believed to be linked to other cases.

KONFRONTASI -  An unsolved string of killings of young suburban women in the 1970s frustrated police for decades. Now authorities in DuPage County believe that by cracking one of those cold cases, they may have uncovered the trail of a serial killer.

By digging up the remains of the suspect, and matching his DNA to the crime, investigators were able to identify Bruce Lindahl as the killer of 16-year-old Pamela Maurer in Lisle in 1976.

Photos of Bruce Lindahl displayed at the DuPage County state's attorney's office on Jan. 13, 2020, prior to a news conference about the 1976 slaying of Pamela Maurer. The picture at upper right is a composite drawing of what the killer might look like, based on analysis of a DNA sample. (Jose M. Osorio / Chicago Tribune)

Though Lindahl died a violent death himself long ago, police believe they may have uncovered a series of his victims, and may finally be able to render some measure of justice to his victims and their families.

“We finally put a name and a face to this monster. And that’s pretty much what he was,” Lisle police Detective Chris Loudon said of Lindahl, who was from Aurora.

Maurer, of Woodridge, a junior at Downers Grove South High School, was found dead along the side of College Road near Maple Avenue on Jan. 13, 1976. She had been visiting a friend the night before when she left to buy a Coke at a nearby McDonald’s and never returned. Authorities said she was sexually assaulted and strangled. 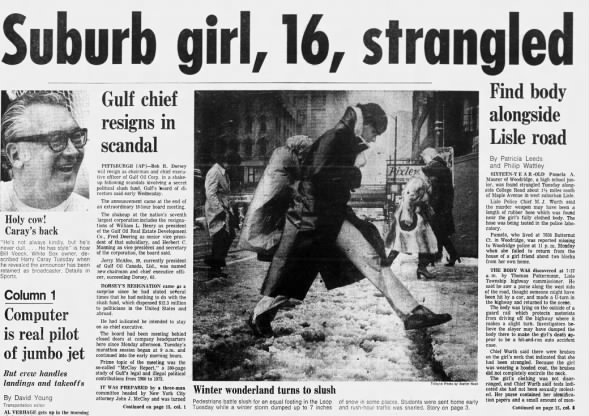 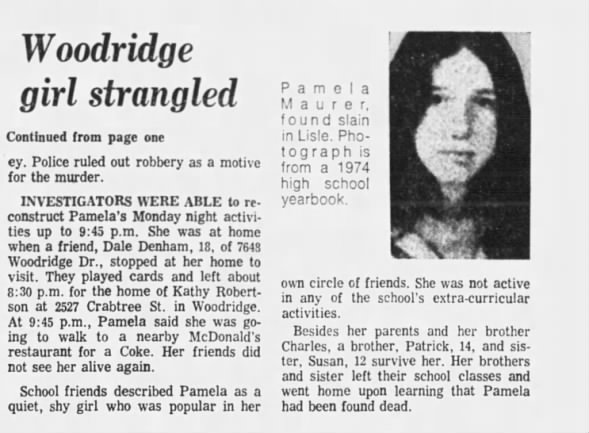 Police said they had always kept the case open, looking for clues. Ultimately, in a first for Illinois, investigators said they used genetic genealogy to solve Maurer’s murder.

By taking a DNA sample from Maurer’s body, investigators used her assailant’s genetic traits such as eye color, build and facial features, to produce an image of what they thought her assailant looked like.

The sketch they had produced bore an “uncanny resemblance” to a photo of Lindahl in a high school yearbook, DuPage County State’s Attorney Robert Berlin said.

Charles Huber, of Naperville, was stabbed to death by Bruce Lindahl in 1981, authorities said. Lindahl bled to death in the same incident, after apparently cutting himself by accident. (DuPage County State's Attorney's Office)

“Today that mystery has finally been solved,” Berlin said at a news conference where he was flanked by police and prosecutors who worked on the case.

[Most read] Column: The culture clash at Prince Harry and Meghan Markle’s wedding signaled trouble ahead »

Loudon said Lisle police had traveled to Texas over the holidays to tell Maurer’s father and brother that the case had been solved. Evans said Maurer’s family moved away shortly after she was killed. Family members could not be reached for comment on Monday.

“Unfortunately, Pam was not Bruce Lindahl’s only victim,” said Berlin, saying he considered Lindahl a serial killer because authorities believe he killed at least three people.

Lindahl may be involved in the disappearance of Deb McCall, a Downers Grove North High School student last seen in November 1979. After Lindahl’s death in 1981, police found a photograph of McCall in his Solfisburg Avenue home, Berlin said. Authorities said they believe Lindahl also killed Deb Colliander, who was last seen leaving her job at Copley Hospital in October 1980. Three months before that, Lindahl was charged in Kane County with kidnapping and sexually assaulting Colliander. He was out on bond and about to stand trial when Colliander disappeared.

Her disappearance forced the eventual dismissal of the charges against Lindahl, Berlin said. Colliander’s body was found in a farm field near Oswego in April 1982. Lindahl, though, had died the year before.

“All of the evidence points to Bruce Lindahl as the person responsible for Deb Colliander’s murder,” Berlin said.

After the case had been dismissed, a friend of Lindahl’s told police that Lindahl had offered him $2,000, a handgun, whiskey and pills to “get rid” of Colliander.

Briars said authorities have no information linking Lindahl to other Kendall County cases. Police are actively seeking to see whether Lindahl may be involved in killings and other crimes committed between 1974 and 1981 in the Lisle, Woodridge, Downers Grove and Aurora areas, authorities say.

Lindahl died at age 29. His body was found in 1981 in a Naperville apartment, next to that of 18-year-old Charles Huber. Lindahl stabbed Huber, a high school student, more than two dozen times, and sliced open his own femoral artery in an apparent accident during the attack, Berlin said. Lindahl bled to death. Police do not know why Lindahl killed Huber, the prosecutor said.

Lindahl, who worked several different jobs including as an instructor at a vocational school in Kaneville, had an arrest record but had never served prison time. He apparently liked photography. Police recovered numerous photos of young women in Lindahl’s apartment, and police are now trying to see if any of the images are victims in unsolved crimes, Berlin said.

“She was a very happy girl — very shy,” Evans said. “She was not the kind of person who would go with a stranger.”

Anyone with information about unsolved crimes that may involve Lindahl is urged to call the DuPage County state’s attorney’s office at 630-407-8107 or Lisle police at 630-271-4252.

Clifford Ward is a freelance reporter. Erin Hegarty is a reporter for the Naperville Sun. The Chicago Tribune’s Christy Gutowski and The Beacon-News’ Megan Jones contributed.

Tags:
face to this monster.
’ DuPage
ID killer of 16-year-old girl in 1976
other cases.
Category:
English